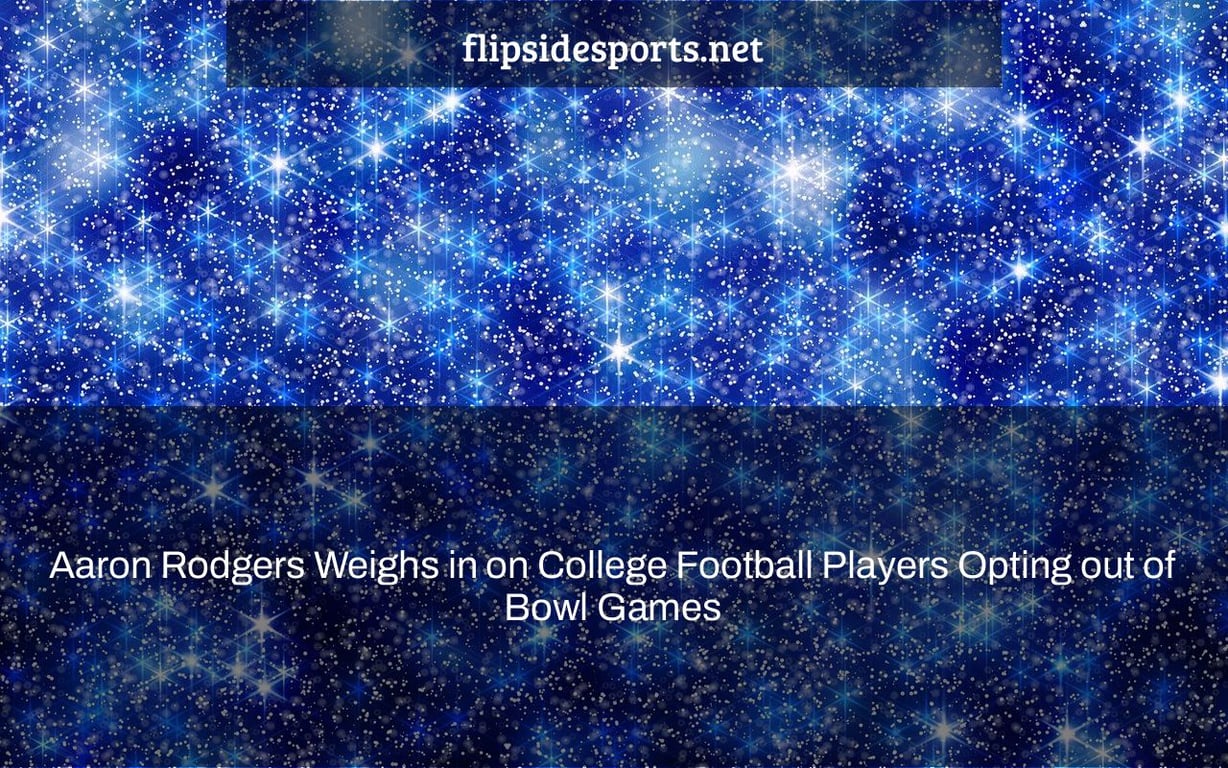 As college football players’ decision to skip bowl games gains attention, Green Bay Packers quarterback Aaron Rodgers does not believe it is a bad thing for the sport.

Aaron Rodgers is a quarterback for the Green Bay Packers and has been in the NFL since 2005. He weighs in on college football players opting out of bowl games.

Aaron Rodgers, the quarterback for the Green Bay Packers, appears to have an opinion on everything, from vaccinations to UFOs and everything in between. That’s why it’s no surprise that the polarizing quarterback has an opinion about college football players skipping bowl games, and that he expressed it with his close friend Pat McAfee.

Several elite NFL Draft prospects from the class of 2022 have opted out of their school’s bowl game.

The 2021-22 college football bowl season lacks the glamour of previous bowl seasons. The large amount of opt-outs from high-end, NFL prospect-quality players is one explanation.

Since Stanford quarterback Christian McCaffery declined to play in the Sun Bowl in 2016, a growing number of elite prospects have chosen to forego their final collegiate game. These aspiring NFL players want to safeguard their draft status and themselves.

Instead of participating in their team’s bowl game, a slew of top-tier players sat at home (or at least on the sidelines) this season.

14 players on ESPN’s Todd McShay’s top 50 list of NFL Draft prospects for 2022 skipped their school’s bowl game. Oregon DE Kayvon Thibodeaux, a possibility for the No. 1 overall selection, and Pitt’s Kenny Pickett, the best quarterback in the draft, are among them.

Ole Miss quarterback Matt Corral, the No. 2-ranked quarterback in the country, did play in the Sugar Bowl and almost suffered a career-ending injury, which mercifully turned out to be simply a badly injured ankle.

Among the top 50 prospects who opted out of the bowl season this year are:

With opt-outs for the 2021-22 bowl season becoming a divisive subject, Green Bay Packers quarterback Aaron Rodgers had to weigh in.

Aaron Rodgers, quarterback of the Green Bay Packers, expressed his opinion on college football players opting out of bowl games.

You won’t be able to call a football argument completely closed until Green Bay Packers QB/Professional troll Aaron Rodgers weighs in in 2022.

Rodgers offered his two cents to the discussion about college football players opting out of bowl games during his usual visit on the Pat McAfee Show, after noting, “I don’t really need to give an opinion.”

Rodgers spoke about his own collegiate bowl experience while at Cal. Rodgers was vengeful, claiming that his Bears missed out on the Rose Bowl that season due to “some very shady vote issues.”

Rodgers said that his team “went out there and got our butts beat by Texas Tech,” but that there was never any doubt about his participation. He does, however, understand why today’s college football players confront a more difficult decision:

College football is linked with a great deal of pride. But now there’s a lot of money at stake as well. With the involvement of the NIL and agencies, there are a lot more cooks in the kitchen advising you whether or not to play. … A lot of youngsters don’t seem to want to play. I believe that is the choice of those children. There’s a lot to be said about the satisfaction of playing, but things are different in 2021 and 2022 than they were in 2004.

College football players choosing out of bowl games, according to Aaron Rodgers

Rodgers didn’t say if he feels the national championship game is more difficult to opt out of than other bowls, but it seems like he does. Players in this year’s game seem to believe so as well.

In the national championship game between Alabama and Georgia, there are plenty of top draft prospects on the field.

While winning a typical bowl game no longer has the same weight for college football players, winning a national title does.

That’s why you’ll see lots of top-round draft talent on the field in the national championship game between the Alabama Crimson Tide and the Georgia Bulldogs, who will be joining Aaron Rodgers in the NFL in a few months.

It’s no surprise that Alabama has a plethora of highly rated NFL talent on their roster. In what is considered a “low” year for Alabama first-round picks, the club only has two players who are sure to play on opening night. OT Evan Neal (the finest offensive lineman in the draft) and WR Jameson Williams are the two players (the top-ranked pass-catcher).

While the Crimson Tide won’t have the same great opening night as in 2021 (with six first-round picks), day two will be jam-packed with Crimson Tide talent. Six more Alabama players are included in Todd McShay’s top 100:

Georgia, on the other hand, should have huge nights on April 28th and 28th, particularly on defense. This year, the club boasts one more top 100 talent than Alabama, albeit none are as well-known as Neal or Williams. The top Bulldog prospects, according to McShay:

The national championship game will feature an incredible amount of talent on the field at Lucas Oil Stadium. And, with the major prize at stake, all of the greatest players will be there.

Aaron Rodgers, the Green Bay Packers quarterback, has weighed in on college football players opting out of bowl games. He is against the idea because he believes that it will hurt the sport. Reference: what happened to aaron rodgers today.