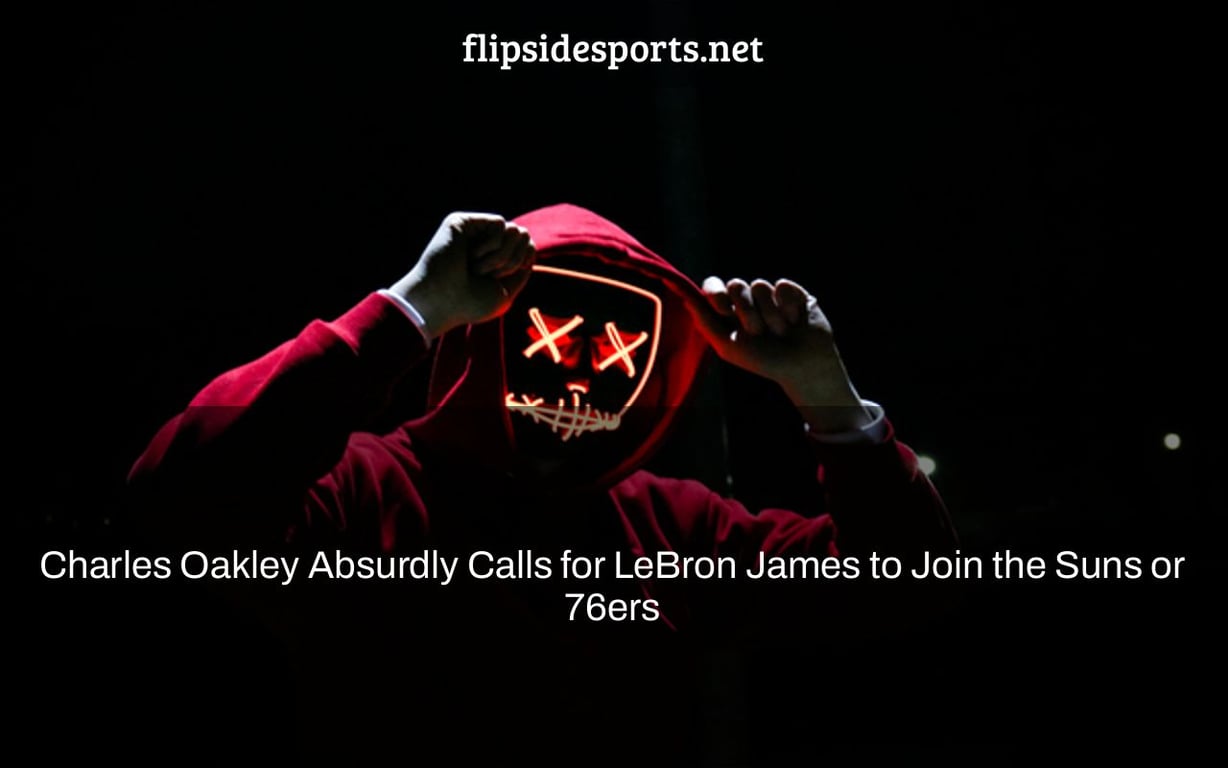 The NBA released a statement on Friday condemning Oakley’s desire to see LeBron James join Phoenix or Philadelphia. It should be noted that this is not the first time an NBA player has gone off-script in this way, as Shaq often made wild predictions about players joining his team.

LeBron James is one championship short of matching Kobe Bryant’s tally of five, and two short of Michael Jordan’s tally of six. To improve his legacy, he badly wants another ring.

The Los Angeles Lakers, on the other hand, do not seem to be a squad capable of contending for a championship anytime soon. As a result, The King may have to look for a new way to capture his fifth crown.

Former NBA star Charles Oakley recently suggested a number of teams for James to join, but all of his suggestions are ridiculous.

They would do more harm than good to LeBron’s legacy.

The Lakers’ future with LeBron James is uncertain.

LeBron James has said that he is determined to helping the Lakers win. However, he is only under contract with LA for one more season after this one, so if the club does not develop into a contender soon, he should consider leaving.

The Lakers have dismantled their championship team and rebuilt it with outdated components after winning a title with The King in 2020. This summer, they signed big-name players like Russell Westbrook and Carmelo Anthony, but the additions have resulted in a major step backward rather than ahead.

Los Angeles is 30-41 and tenth in the Western Conference.

The Lakers may find it tough to make significant changes this summer. Westbrook, who was one of the front office’s worst blunders, is under contract through 2022-23 and will earn $47 million. Any team would be unlikely to want to take him off their hands.

So, if the Lakers fail to retool and continue to struggle next season, James will be a free agency in 2023. He will be free to join any squad he wants in the goal of winning another championship.

Charles Oakley has two teams on which he would want to see him play in the near future.

Charles Oakley wants LeBron James to play with the Suns or the 76ers.

Charles Oakley is more than simply a former athlete with thoughts on LeBron James. Since James was a high school student in Ohio, he has known the 18-time All-Star.

And, according to Oakley, LeBron should choose between two teams: the Phoenix Suns and the Philadelphia 76ers.

On the March 14 edition of Club Shay Shay, Oakley remarked, “I really feel awful for him, the scenario that’s going on in LA right now.” “… He is entitled to better. I have no idea what will happen. He may have to leave Los Angeles… He needs a ring, and I believe he will have to leave to get one. And right now, the only locations he can probably get it in are Phoenix or Philadelphia.”

Oakley suggested that James be traded to those clubs, and it seems that the interview was taped before the NBA Trade Deadline, since he included Ben Simmons of the 76ers. However, financial considerations and his journey to those clubs aside, James playing for the Suns or Sixers is a bad idea.

LeBron James should never contemplate joining the Phoenix Suns or the Philadelphia 76ers.

Going to the Suns or 76ers would be ideal for LeBron James if he wants to win another championship. Both sides are stacked with talent.

Winning championships with such teams, on the other hand, would be detrimental to his legacy.

The move to Phoenix would be similar to Kevin Durant joining the Golden State Warriors. The Suns were just in the NBA Finals last year, so James would just be joining them. “Michael Jordan never joined an already established squad to seek a ring,” James’ detractors would claim. A title with Phoenix would just not be as significant as his previous four.

The 76ers are in a similar predicament. James would be riding Joel Embiid and James Harden’s coattails, despite the fact that they haven’t gone to the NBA Finals.

At this moment, LeBron’s best options are to return to Cleveland and play on a good (but inexperienced) team, or to remain with the Lakers and wait for a retooling in 2023.

Charles Oakley was correct in his assessment that LeBron James may benefit from a change of environment. But no one would bet on him winning a championship with the Suns or 76ers.