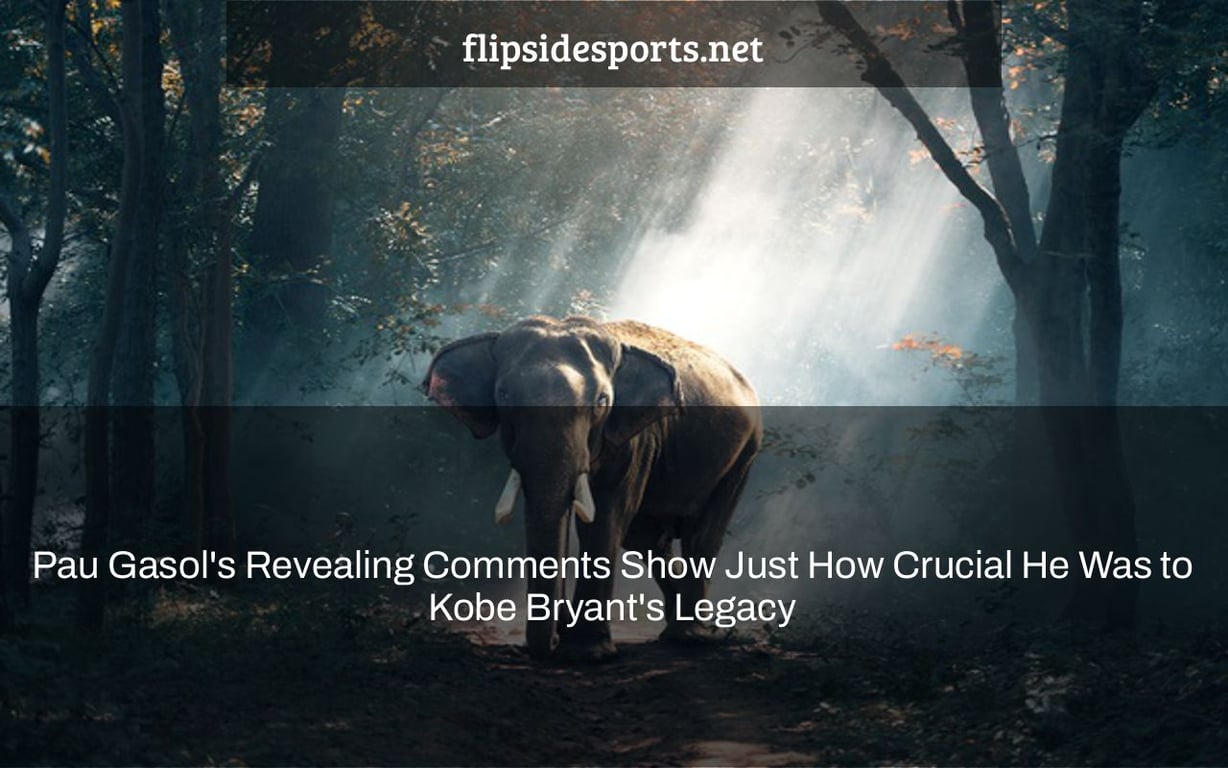 The basketball legend was the face of Kobe Bryant’s “Mamba Mentality” and is often credited with helping transform the Lakers from middling team to NBA champions.

Pau Gasol’s wife, Misa, has just revealed some of the most revealing comments about how crucial Pau was to Kobe Bryant’s legacy.

Kobe Bryant struggled to return to the top after his well-publicized separation with Shaquille O’Neal on the Los Angeles Lakers. In each of the first three years after O’Neal’s move to the Miami Heat, his club either missed the playoffs outright or failed to advance beyond the first round.

When the Los Angeles Lakers acquired Pau Gasol from the Memphis Grizzlies, everything changed. The Lakers moved from being a middle-of-the-pack Western Conference club to being the team to beat, reaching the NBA Finals three times in a row and winning two titles.

Gasol recently spoke on his time in Los Angeles, and his words revealed exactly how important he was to Kobe’s legacy.

As previously stated, Shaquille O’Neal headed to the Miami Heat in the 2004 summer after winning three championships and reaching four Finals with Kobe Bryant on the Lakers between 2000 and 2004. He was instantly successful, earning a championship with the Heat in 2006.

However, in February 2008, the Lakers acquired Pau Gasol from the Grizzlies. Pau had previously been named an All-Star and was enjoying a good season with Memphis, averaging 18.9 points and 8.8 rebounds through 39 games.

His presence on the low block was exactly what the Lakers needed after losing Shaq, and it turned out to be the ideal move.

After the deal, the Lakers went 27-9 and claimed the Western Conference’s top seed with a 57-25 record, helping Bryant earn his sole MVP award. Gasol and Kobe then guided the Lakers to the NBA Finals, where they were defeated by the Boston Celtics in six games.

However, throughout the course of the following two seasons, they sorted things out. With Gasol and Bryant, the Lakers reached two more finals in a row, winning back-to-back titles in 2009 and 2010.

Pau Gasol spoke about his trade to the Los Angeles Lakers.

The Los Angeles Lakers’ Kobe Bryant (left) and Pau Gasol during a game against the Atlanta Hawks on Dec. 16, 2013. Getty Images/Kevin C. Cox

Pau Gasol was a three-time All-Star with the Lakers and spent the 2013-14 season alongside Bryant in LA. He played for the Chicago Bulls, San Antonio Spurs, and Milwaukee Bucks before retiring, but he stayed close to Kobe Bryant throughout his life.

Gasol recently reminisced on the deal that brought him to Los Angeles.

On the March 25 edition of The Old Man and the Three podcast, Gasol stated, “He (Kobe) accepted… that that was his opportunity; that was going to be his shot to attempt to win it again.”

Even though it was late at night and the club had a noon game the following day, the No. 3 overall choice in the 2001 NBA Draft stated Bryant wanted to meet with him as soon as he could once the trade became official.

“Hey, once you arrive to the hotel; whenever you finish your interviews, whatever they have you doing, contact me, I’m coming up to your room,” he texted. Gasol remembered something. “… He walked over to me and said, ‘Look, I’m quite delighted that you’re here.’ Let’s be honest about it. I’m overjoyed; I’m overjoyed that you’ve here. But now let’s go win a championship. Let’s get this thing won…. That’s it. This is our chance to shine. It’s up to us to grasp it. ‘We have to go after it.’

They did actually pursue it.

Pau Gasol was a pivotal figure in Kobe Bryant’s career.

Following Shaquille O’Neal’s departure, Kobe Bryant realized he needed someone he could rely on every time he stepped on the floor.

Pau Gasol grew up to be that man.

Pau Gasol was the Lakers’ lone missing component in their quest to become legitimate championship contenders, and Kobe knew it. Bryant may have only won three championships instead of five if LA hadn’t got him.

Pau Gasol was more than a gifted Lakers center. He was instrumental in cementing Kobe Bryant’s status as one of the greatest basketball players of all time.

RELATED: LeBron James Couldn’t Keep an Expletive Out of His Mouth When It Came to Kobe Bryant’s Olympic Shot Selection