What Are the Most Popular Sports in Spain? 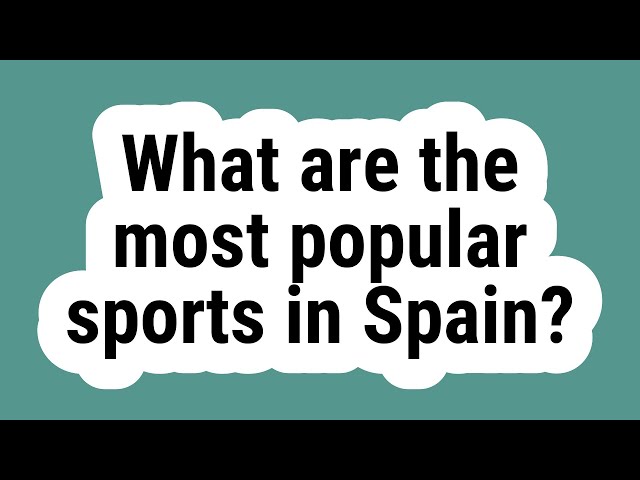 Spain is a country with a rich sporting culture, and there are a number of popular sports that are enjoyed by both locals and visitors. From football to tennis and everything in between, here are some of the most popular sports in Spain.

Soccer is one of the most popular sports in Spain. Every year, millions of people tune in to watch La Liga, the top professional soccer league in Spain. Barcelona and Real Madrid are two of the most popular teams in Spain, and they consistently compete for the championship title. Soccer is also a popular sport to play at all levels, from casual games in the park to organized leagues.

Basketball is one of the most popular sports in Spain, with almost 2 million people playing the sport. The sport is played at both the professional and amateur level, with a number of different competitions taking place throughout the country. The Spanish Basketball League is the top professional league in the country, and features some of the best players in the world. A number of Spanish players have gone on to have successful careers in the NBA, including Pau Gasol and Marc Gasol.

Tennis is one of the most popular sports in Spain. This is largely due to the success of Spanish players such as Rafael Nadal and Garbiñe Muguruza. Tennis is a racket sport that can be played individually against a single opponent (singles) or between two teams of two players each (doubles). The objective of the game is to score more points than the opponent.

While football is the most popular sport in Spain, there are many other sports that Spaniards enjoy. One of those sports is cycling.

Cycling is a popular recreational activity as well. Many Spaniards enjoy riding bikes for exercise or recreation. There are even some dedicated bike paths in Spanish cities.

Motorcycling is a very popular sport in Spain, with a number of world-famous riders and teams hailing from the country. MotoGP is the pinnacle of motorcycle racing, and Spain has produced a number of champion riders in this category, including Marc Marquez, Jorge Lorenzo, and Dani Pedrosa. There are also a number of other popular motorcycling competitions in Spain, such as the Spanish Moto3 Championship and the 24 Hours of Barcelona endurance race.

Formula One is one of the most popular sports in Spain. More than 2 million people watch the sport on television, and there are several Formula One races held in Spain each year.

Aside from Formula One, other popular sports in Spain include basketball, football (soccer), tennis, and cycling.

Rugby is a sport that is played with a ball and two teams of fifteen players each. The game is played on a field with H-shaped goalposts at each end.

Rugby is a sport that originated in England, and it is one of the most popular sports in Spain. The Spanish national rugby team has competed in several Rugby World Cups, and the sport is also popular at the club level.

Boxing is a very popular sport in Spain and has been for many years. Some of the most famous Spanish boxers include Antonio Margarito, Juan Manuel Marquez, Miguel Cotto, and Manny Pacquiao.

Golf is one of the most popular sports in Spain. Every year, thousands of tourists flock to the country to play golf on some of the best courses in the world. The Costa del Sol, in particular, is a hotspot for golfers, with many world-famous courses located in the area. Other popular areas for golfing in Spain include Catalonia, the Canary Islands, and Andalusia.

In addition to the three most popular sports in Spain, there are several other sports that are also enjoyed by Spaniards. These include basketball, tennis, golf, handball, roller hockey, and motor racing.

Basketball is particularly popular in Spain, with the country having produced several world-class players over the years. The Spanish men’s national team has won two Olympic gold medals and is a regular contender at major international tournaments. The women’s national team has also enjoyed considerable success, winning EuroBasket in 2013 and 2017.

Tennis is another popular sport in Spain, with the country boasting several world-class players such as Rafael Nadal and Garbiñe Muguruza. Spanish players have enjoyed success at all four Grand Slam tournaments, with Nadal winning a record 13 French Open titles and Muguruza becoming the first Spanish woman to win Wimbledon in 2017.

Golf is also hugely popular in Spain, with the country playing host to some of the biggest tournaments on the European Tour. The likes of Sergio Garcia and Jon Rahm have both tasted success on the international stage, while Miguel Ángel Jiménez is one of the most successful Spaniards in history after winning multiple senior majors.

Handball is another sport that is widely played and followed in Spain. The country’s men’s national team is one of the most successful in history, having won two Olympic gold medals and three World Championships. The women’s national team has also enjoyed considerable success, winning EuroHockey in 2014 and 2016.

Roller hockey (also known as rink hockey) is a hugely popular sport in Spain, with the country being home to some of the best teams in Europe. Both men’s and women’s teams from Spain have enjoyed success at international level, with the men’s team winning several world championships and the women’s team becoming Olympic champions in 2008.

Finally, motor racing is also popular in Spain thanks to the country’s rich pedigree in the sport. Fernando Alonso is one of the most successful Formula One drivers of all time while Marc Márquez has dominated MotoGP for much of the past decade.